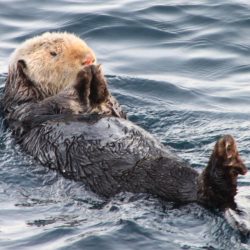 I often run along our bluff tops here in Santa Barbara admiring the ocean and our Channel Islands afar, looking out in hopes I may be so lucky to see one of my favorite ocean friends, the southern California sea otter. Today, I am excited to share with you that for the second time in just over two years, this month a federal judge ruled in our favor to protect the threatened sea otter!