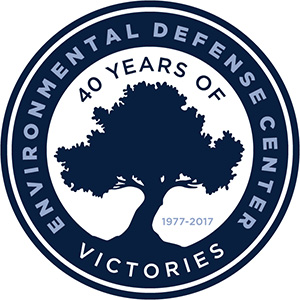 For me gratitude brings the greatest bliss I know, and in this state I recall the birth of the Environmental Defense Center (EDC) in 1977, forty years ago, and the work that began in 1969 that led to its creation.

In the immediate aftermath of the blow-out that occurred on an offshore oil-drilling platform on January 28, 1969 that led to the infamous Santa Barbara Oil Spill, a group of local citizens got together to form a federally-recognized organization for the purpose of mounting legal challenges to oil drilling and production operations in the Santa Barbara Channel. The name of the organization was Santa Barbara Citizens for Environmental Defense (SBCED), and its directors were Robert O. Easton, Ken Millar, Norman K. Sanders, and Selma Rubin. Among the group’s key advisors and supporters were Pearl Chase, W.H. Ferry, and Fred Eissler.

As a newly-arrived young lawyer, I had the great fortune to be introduced to the group in the summer of 1969 and to immediately begin my work with them. This work led to the eventual founding of EDC. Our primary goal at SBCED that summer and fall was help to plan and carry out a conference on the first anniversary of the 1969 Oil Spill, at which nationally-prominent leaders in law, science, education and government would come together to endorse the idea that citizens are possessed of environmental rights as basic and inalienable as their other civil rights. To accomplish this, we formed a coalition of conservation (the term “environmental” had not yet come into common parlance) and other civic groups known as the January 28 Committee, and with the blessing of Pearl Chase, I served as its chair.

On January 28, 1970, the conference on the Santa Barbara Declaration of Environmental Rights took place on the campus of Santa Barbara City College, and the proceedings fulfilled and exceeded our expectations. The conference featured talks by Paul Ehrlich, David Brower, Congressman and Earth Day co-chair Pete McCloskey, Senator Alan Cranston, former Interior Secretary Stuart Udall, Earth Day organizer Denis Hayes and others. More than one speaker that day referred to Santa Barbara as the birthplace of a new environmental movement.

Within weeks after the successful Environmental Rights Conference, the January 28 Committee morphed into the Community Environmental Council (CEC), and I became its founding president, and SBCED’s Selma Rubin was one of its founding officers and directors. In the capable hands of Executive Director Paul Relis, a recent graduate of UCSB, CEC opened its Ecology Center at 15 West Anacapa in downtown Santa Barbara in time for the community’s observance of the nation’s first Earth Day events on April 22, 1970. Soon after, CEC created the Community Organic Garden at the corner of Chapala and Figueroa Streets, adjacent to where the downtown bus terminal is today.

The work of CEC in the years from 1970 to the autumn of 1977 was essential to the capacity-building that I and the directors of SBCED judged to be needed in preparation for the opening of a full-time public interest law firm based in Santa Barbara. During this period, SBCED acted pursuant to its non-profit charter to accept and disburse funds for litigation efforts to address offshore oil drilling and production operations, and a wide variety of onshore environmental planning and development issues. Phil Marking, Bruce Sharp, Francis Sarguis and I were thus able to take on environmental cases as private attorneys acting in the public interest during this period.

By 1977, it had become clear to SBCED’s directors and me that the time had come to open a center for the provision of full-time public interest environmental legal services. In September of that year the SBCED directors voted to accept my proposal that it accept EDC as a special project that would operate out of my former private law practice office at 1005 Santa Barbara Street. I chose as our motto “Education is the first line of environmental defense. Legal action is the bottom line.”

We soon had an active docket of cases before various local, state and federal administrative agencies and courts representing a variety of environmental groups. Our work included a wide array of environmental protection issues, including several of national as well as local concern, such as a proposal to construct an LNG importation terminal near Point Conception on land held sacred to Native American groups as the Western Gate, and the effort to prevent the licensing of the Diablo Canyon nuclear power plant.

In 1982, I stepped aside as the Executive Director and Chief Counsel of EDC in order to assume full-time teaching duties at the UCSB Environmental Studies Program where I had begun as a part-time lecturer in 1971. Since that time it has been an honor and privilege for which I am deeply, inexpressibly grateful to have served as an advisor to and supporter of EDC as it has grown and developed into the peerless organization that it is today.

I cry at the happiest moments that occur in my life. To write these words concerning an organization that I love causes my tears to flow. In my heart a song is singing. It begins and ends with Thank You, and there are many, many a Thank You in between.

Marc McGinnes is a founder of the Environmental Defense Center who served as the organization’s first attorney. His deep connection to environmental work in Santa Barbara also led him to teach environmental law and other courses over a more than 30 year career.