Los Angeles, CA — In a major victory for threatened southern sea otters, U.S. District Court Judge John F. Walter on Friday issued a ruling denying a challenge by some fishing organizations to a U.S. Fish and Wildlife Service (FWS) decision that has restored protections for sea otters in Southern California.  Environmental Defense Center, The Otter Project and Los Angeles Waterkeeper intervened in the case on behalf of the FWS. 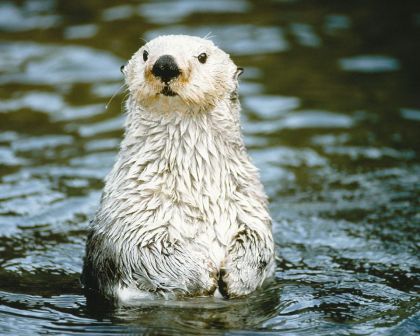 The case stems from a 2012 decision by FWS to officially terminate a ‘no-otter zone’ that had been established in 1987 in an attempt to balance sea otter protections with fisheries protections. The intent of the 1987 action was to establish a thriving otter community at San Nicolas Island, and in exchange, to exclude otters from an area extending from Pt. Conception in Santa Barbara County to the Mexican border. Unfortunately, this plan proved deadly to otters that were either killed during translocation efforts or died trying to swim back to their former habitats, and so FWS rightfully terminated the plan. This important FWS decision allowed sea otters to begin to regain a foothold in their natural range in Southern California – an outcome vital to the recovery of the species.

“We applaud this important ruling, which upholds the Fish and Wildlife Service’s 2012 decision to terminate the ‘no-otter zone,’ and allows the threatened southern sea otter to reinhabit their historic range in southern California,” said Brian Segee, Senior Attorney with the Environmental Defense Center.  “The southern sea otter has been largely absent from southern California for far too long, and its return will help restore depleted kelp forests and improve the overall health of our marine ecosystems.”

“The commercial fishing groups led by the urchin fishermen were insisting on an unnatural, unhealthy system serving their own narrow commercial interests.  With the judge’s ruling, otters will slowly return and change the system back to the healthier and more complete ecosystem  it once was, with bigger kelp forests and more fin-fish,” said Steve Shimek, Executive Director of The Otter Project. “There is so much we can do to help the struggling sea otter population such as keeping oil out of the ocean, fighting agricultural pollution, and helping otters return to their native habitat.”

In the ruling, the judge first noted that the fishing groups did not have legal standing to bring the challenge, because they have not been harmed by the termination of the no-otter zone. The judge then pointed out that the FWS acted appropriately in ending the 1987 policy, noting that to require FWS to continue with a program that caused harm to sea otters would be an “absurd result [that] is totally inconsistent with the Endangered Species Act.” The court ruled that the FWS has an obligation to protect sea otters, and to take actions necessary to achieve that goal.

“Our marine ecosystem has been out of balance for decades. Removing the no-otter zone, restoring kelp forests, and establishing marine protected areas are critical actions for reversing this degradation,” said Bruce Reznik, Executive Director of Los Angeles Waterkeeper. “The science shows that our fisheries will be much more robust once our habitats are protected and the natural balance of the food chain is restored.”

FWS’s December 2012 decision to end the no-otter zone was made pursuant to a 2010 legal agreement reached by The Otter Project and EDC with the FWS after the groups sued to end the agency’s decades-long delay in making a required decision on whether or not to terminate the no-otter zone.

The southern sea otter population numbers around 2,800 in a range that once supported 12,000 to 16,000 sea otters and is listed as “threatened” under the Endangered Species Act and “depleted” under the Marine Mammal Protection Act.  Sea otter recovery is impossible with the no-otter zone in place.

Beginning in 1987, when the no-otter zone was established, the FWS moved 140 southern sea otters to San Nicolas Island, the most remote of California’s Channel Islands, in an attempt to establish a reserve population and protect the small and struggling mainland population from a catastrophic event, such as an oil spill.  Shellfish fishermen, the offshore oil industry, and the Navy objected to the plan and as a result the no-otter zone (officially called the ‘management zone’) was established.  Unfortunately, the relocation plan failed immediately when all but about 11 of the 140 otters swam away from San Nicolas Island and back to their home waters or perished.  In spite of the failure, the no-otter zone stayed in place and wandering otters were trapped and deported for many years.  The failure of the FWS to protect the otters in this area led to the lawsuit filed by The Otter Project and EDC.

The Environmental Defense Center, a non-profit law firm, protects and enhances the local environment through education, advocacy, and legal action and works primarily within Santa Barbara, Ventura, and San Luis Obispo counties.  Since 1977, EDC has empowered community based organizations to advance environmental protection.  Program areas include protecting coast and ocean resources, open spaces and wildlife, and human and environmental health.  Learn more about EDC at www.EnvironmentalDefenseCenter.org.

The Otter Project protects our watersheds and coastal oceans for the benefit of California sea otters and humans through science-based policy and advocacy. Founded in 1998, The Otter Project has worked to improve nearshore ocean health and resolve the barriers to sea otter recovery.  Learn more about The Otter Project at www.otterproject.org.