Ellwood Mesa: A Story of Preservation

Ellwood Mesa is a mecca for hikers, joggers, cyclists, surfers, and horseback riders to enjoy a natural preserve of exceptional beauty. Situated on the Western edge of Goleta, it is protected forever from future development. This is no accident, however. More than 20 years ago, a proposal for 161 units on 135 acres on Ellwood Mesa was going through the Santa Barbara County planning approval process which would have made access to much of the Mesa inaccessible to the general public and damaging to environmentally sensitive habitats. Efforts in the early 1990s to block the proposal and propose possible design alternatives by the Environmental Defense Center (EDC) and Save Ellwood Shores were rejected by the developer. At issue was the potential loss of incomparable open space by the ocean, with native grasslands, vernal pools, raptor sites, threatened and endangered species and monarch butterfly roosting sites in the Eucalyptus groves.  In addition, the County was proposing active and passive recreational uses on the neighboring Santa Barbara Shores Park. In 1993, the County approved a specific plan for 161 units on 40 acres on the Mesa. EDC then filed a lawsuit on behalf of Save Ellwood Shores, a local community group, which was withdrawn when the California Coastal Commission denied the plan. Through several years of modified plans and new litigation, EDC, Save Ellwood Shores and the then-developer settled the case with some protection for sensitive  habitat. But a major problem remained on access to the development, which was never resolved, with the County and Coastal Commission in disagreement. 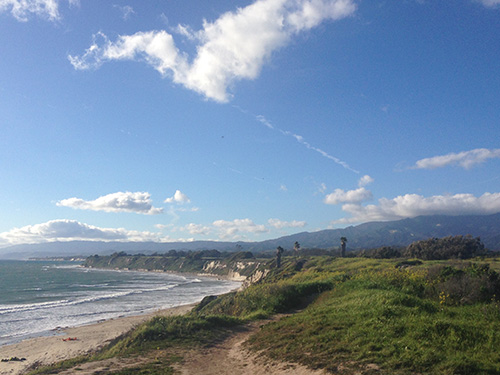 2001 was a turning point. A new developer came on the scene. Bob Comstock assumed an option to develop the site from the current developer, Randy Fox. In a new approach, he went to people in the community to see what they would like. He met with Linda Krop at EDC saying he did not want a fight but what ideas did she have for the property. Linda put on the table once again the proposal for a land swap, preserving the sensitive Mesa habitat from development and instead siting housing north of Devereux Creek, on Santa Barbara Shores Park, away from the ocean and adjacent to Hollister Avenue. He was intrigued with this proposal and agreed to take it back to his staff to see if it could work. He came back with a positive response, though many details were yet to be worked out. At this time UCSB was also looking at development plans for the eastern end of the Mesa and agreed to relocate proposed staff and student housing away from the bluffs. Out of this, the Ellwood Devereux Coast Open Space plan was born, 652 acres of contiguous open space and natural areas.

Around this time the City of Goleta was incorporated and the Ellwood Mesa development plan became the new City’s first major planning project. There were issues involved with permitting development on the Santa Barbara Shores Park, which had been purchased in part with state park funds. This required special legislation from Senator Jack O’Connell’s office. There was also money to be raised as the assessed value of the parkland next to Hollister Avenue was significantly less than that of the Mesa sites facing the ocean. To make the proposal work around $20,000,000 had to be raised to close the gap, plus the exchange of 36 acres for development on the Santa Barbara Shores Park site. Critically, at this time the Trust for Public Land became involved. This national organization is dedicated to saving environmentally and historically valuable sites from destruction. Saving Ellwood became a major project for them and Carla Frisk (after working at Jack O’Connell’s office), along with TPL fundraiser, Suzanne Moss, became their local consultant. They were instrumental in acquiring millions of dollars from federal, state and local agencies, as well as local foundations; held numerous local fundraising events, from kindergartners on up, and approached major individual donors including Peter Sperling. The Sperling Preserve at Ellwood Mesa is named in recognition of his major $5 million contribution.

In 2004, the City of Goleta released the Environmental Impact Report for Comstock Homes and the Ellwood Open Space and Habitat Management Plan, and later that year the City approved the project allowing 62 homes on approximately 30 acres next to Hollister Avenue. The plan preserved the remaining land, more than 220 acres, including the entire Ellwood Mesa as public parkland.

It was a huge community effort involving hundreds of individuals and organizations to preserve this unique precious bluff top and shoreline. Many people now claim ownership of the liberating idea of the land swap, which satisfied the developer, government entities and environmentalists. But it was proposed early on and pushed by EDC and its Chief Counsel, Linda Krop, in particular. EDC can indeed claim parenthood of this wonderful site!

It has been 12 years since the project was approved by the Coastal Commission and human impact on parts of the Mesa is taking its toll. Trails are eroding and beach access is becoming problematic. Natural areas, just like the built environment, need attention and maintenance. The drought has taken its toll on trees and their canopy, affecting the environment for the Monarch butterflies. There is still work for EDC and the community, monitoring and caring for this special environment.