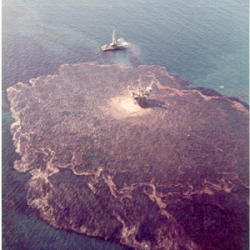 Oil saturated the Santa Barbara Channel and washed ashore for eleven days before the well was capped—yet even after that, oil continued to seep up steadily through fractures in the ocean floor for several years. In the end, over three million gallons of oil were released, fouling 35 miles of coastline, killing as many as 15,000 seabirds, and poisoning dolphins, seals and sea lions. Santa Barbara’s tourist-dependent local economy, businesses and property owners, and the local fishing industry all suffered extensive economic loss in the wake of the spill.

The Environmental Defense Center (EDC) was founded as a response to this disaster. In 2017, as we look back on this dreadful anniversary, EDC is also celebrating our fortieth anniversary, so this seemed a good time to look back at how our work fighting irresponsible oil development has impacted this place we are so lucky to call home.