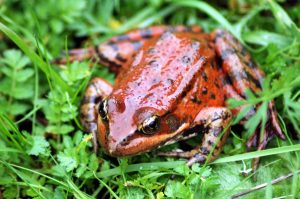 Efforts to conserve species and promote biodiversity are critical right now as the world faces the threat of extinction of approximately one million animal and plant species—more than ever before in human history. Amphibians in particular play a crucial role in preserving healthy ecosystems and yet forty percent of amphibian species face extinction due to habitat loss, disease, and drought. For more than forty years, the Environmental Defense Center has been working to protect threatened and endangered species, and today, that work remains critical in our fight against dangerous oil and gas proposals that threaten Santa Barbara County. Inspired in part by two proposed projects located in the Cat Canyon Oil Field, the U.S. Fish and Wildlife Service is considering whether to finalize a General Conservation Plan for Oil and Gas Activities in Santa Barbara County (“General Conservation Plan” or “Plan”). The Plan covers 674,220 acres throughout the County, including coastal areas, and would open the door for more dirty fossil fuel energy generation in areas that support a mosaic of natural habitats for protected species.

The Plan would streamline “take” permits for oil and gas projects that would harm or kill three species protected under the Endangered Species Act: the California red legged frog, California tiger salamander, and Lompoc yerba santa. These species and their habitats are under threat from the proposed massive expansion and intensification of oil operations in the Cat Canyon Oil Field, located about ten miles southeast of Santa Maria. Cat Canyon is home to a diverse assemblage of State and federally listed rare, threatened, and endangered species. The projects proposed by TerraCore (formerly ERG) and Aera Energy would drill about 500 new wells through the Santa Maria Groundwater Basin to extract the bottom-of-the-barrel crude oil, expending considerable energy in the process. These risky oil and gas development projects would have devastating impacts on imperiled species by grading over their habitat, polluting streams and groundwater, and killing them during construction, trucking, and spills.

The Santa Barbara County California tiger salamander population is in danger of extinction throughout its range, warranting its listing as “endangered” under the Endangered Species Act. The decline of this species has been linked in part to oil and gas activities, including oil sump ponds acting as toxic sinks, dangerous hydrogen sulfide gas burping out from oil wells and settling into low-lying areas, and oil field runoff contaminating breeding ponds. The California red-legged frog is listed as “threatened,” meaning it is likely to become endangered in the near future, and has been wiped-out from seventy percent of its former range. Lompoc yerba santa is an “endangered” plant that is endemic to western Santa Barbara County and is so rare that it only appears in three areas throughout the County. The limited distribution and small population size of this species makes it extremely at risk of extinction from changes in its environment.

Despite these alarming trends, the Plan would allow TerraCore and Aera Energy to permanently destroy 675 acres of California tiger salamander habitat, at least 355 acres of California red-legged frog habitat, and 27.5 acres of habitat for the Lompoc yerba santa. In addition to habitat destruction, the oil companies would be allowed to injure or kill a number of tiger salamanders and red-legged frogs each year.

The Endangered Species Act was established to halt and reverse the severe trend toward species extinction. To achieve this ambitious goal, the Act prohibits the “taking” of protected species but provides a limited exception, by permit, if it occurs as a result of lawful activities. Prior to issuing this permit, a conservation plan is required to provide a strategy for avoiding, minimizing, and mitigating harm to protected species and their habitats from an applicant’s activities. Unfortunately, the General Conservation Plan for oil and gas activities in the County does not fulfill these conservation obligations and a more protective approach was dismissed in the Plan because it purportedly would not meet the needs of oil and gas operators, like TerraCore and Aera Energy.

For many of us, it is obvious that the conservation of the species and the ecosystems upon which they depend is what matters most. Oil companies should avoid impacts to protected species from habitat destruction, roadkill, spills, fires, and disease. That is the best conservation approach. Unfortunately, no duty is imposed on the oil companies in this Plan to avoid the impacts from their destructive activities. Instead, the Plan relies on the goodwill of the oil companies to decide if they will avoid impacts, and allows them to harm protected species or destroy their habitat through implementation of mitigation measures that are woefully inadequate and illusory. Gambling with our natural resources for the benefit of oil and gas development offers no upside, only risk. The only players set to gain are the oil operators who inspired this Plan from the beginning.