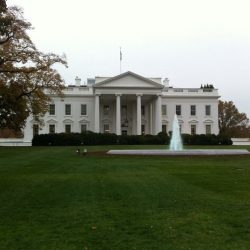 Our county and community breathed a sigh of relief when the results of the November 3 Presidential election were finally announced. While we don’t envy the burden placed on the new Administration to reverse four years of threats to our nation, most notably the failure to protect us from a global pandemic, we are also optimistic and excited about what a Biden Administration may accomplish.

We are still reeling from the onslaught of attacks on so many issues of importance to our society, including health care, education, diversity, equality, and the environment. At times, the barrage was overwhelming, and we wondered how our Nation would survive. Well, at long last there is a light at the end of the tunnel. The light comes from the November 3 Presidential election, and it gives us hope for a brighter, safer future.

In this blog post I will focus on what the election means for the environment. For four years, the Trump administration issued executive orders and memos, pushed through regulations, and fought environmental protections in court. Fortunately, Congress did not follow suit, and much of what Trump did can be undone. Here’s how.

First, Trump’s executive actions can be reversed immediately. President-elect Biden has already pledged that one of his first executive actions will be to rejoin the Paris Climate Accord. In fact, he has pledged to help improve this agreement in order to meet the evolving threats of climate change. President Biden can also combat climate change by reinstating the Clean Power Plan and by funding clean energy programs and projects.

Other executive actions will hopefully include withdrawing funds for the Border Wall, restoring protections for National Monuments, and considering new National Marine Sanctuaries. This latter action is especially exciting for us on the South Central Coast because it could result in the establishment of the proposed Chumash Heritage National Marine Sanctuary, for which EDC and our partners have continuously advocated. This Sanctuary would extend from Gaviota to the southern border of the Monterey Bay National Marine Sanctuary, protecting cultural resources, migrating whales and other wildlife, and prohibiting offshore oil drilling.

In terms of local issues, EDC will urge the Bureau of Ocean Energy Management to withdraw Trump’s proposed 5-Year Leasing Program, which put the entire coast – including the Santa Barbara Channel – at risk of new oil development. We will also seek a reversal in the federal government’s approval of offshore fracking permits. EDC is litigating this issue in the Ninth Circuit Court of Appeals – we already obtained an injunction from the district court, and we would happily settle the case if the new administration would reverse its position and agree that fracking poses unacceptable risks to the marine environment. Rather than focus on promoting offshore oil development, the federal government should ramp up its focus on renewable energy, such as responsibly-sited offshore wind.

We are hopeful that the Biden administration will protect and restore our public lands onshore. In addition to reinstating protections for National Monuments, we look forward to action withdrawing fracking proposals on public lands, including the Carrizo National Monument in San Luis Obispo County.

We see great promise for the Environmental Protection Agency (EPA). With a new President, this agency can resume its efforts to improve air quality and the safety of our drinking water. EPA should also restore protections for wetlands and streams, and initiate a new rulemaking to ensure protection for these important ecosystems.

These agencies will (hopefully) be very busy. There’s a lot to undo and fix. The administration will need to review literally dozens of regulations that weakened protections for coastal resources, endangered and threatened species, science-based decisionmaking, information sharing, and public participation.

We are confident that all of these issues are top of mind for the incoming Administration. We know that we will have an ally in the White House, because Vice President-elect Kamala Harris has already supported many of these efforts. In addition to supporting the Green New Deal and a fast and swift response to the climate crisis, Senator Harris has opposed offshore oil drilling and fracking on public lands. She knows how important our coast is. As State Attorney General, she filed criminal charges against Plains All American Pipeline for the 2015 oil spill that impacted our beaches, parks, fishing grounds, businesses, and community. And of course, as a law firm, we appreciate her solid commitment to a strong and independent judiciary!

In closing, we look forward to this new era. The potential is great, the urgency is real, and the opportunity is here. We realize that the election did not change anything in and of itself, and that we should not take anything for granted. We will need to roll up our sleeves and get to work. EDC will be there, with our clients and partners, to work with the Biden-Harris administration to protect our climate, air, water, land, public health, and wildlife in this place we call home and beyond.